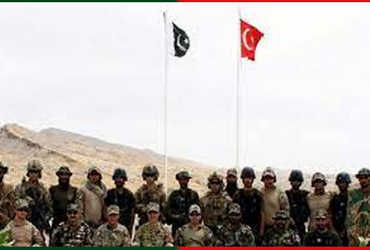 New Delhi: Pakistan Air Force is conducting a military exercise to counter fighter jets like Rafale and MiG-29 that have joined the Indian Air Force. Pakistan has sent JF-17 fighter jets to Turkey for war games. India is alert to this incident.

Fighter aircraft of all these countries are conducting joint military exercises in Turkey. Pakistan’s JF-17 fighter jets conducted special maneuvers to infiltrate special Rafale and MiG-29 types of aircraft. The Pakistan Air Force conducted a study on how to inflate Indian fighter jets from similar aircraft from Qatar and Azerbaijan.

This military exercise is for exchange of information about different types of fighter aircraft. With India having Rafale and MiG-29, Pakistan focused its attention on gathering information about such fighter jets. Pakistani pilots were trained how to fight if they had to go to war against these Indian owned aircraft.

Turkey and Qatar have made special arrangements for receiving information to the Pakistan Air Force. Qatar has previously reportedly trained Pakistani pilots to fly Rafale aircraft.

Like India, Qatar also recently bought Rafale aircraft from France. According to reports, military exercises in Turkey will last till July 3. Turkey is showing strength in the pretext of developing combat skills among the Allied forces.