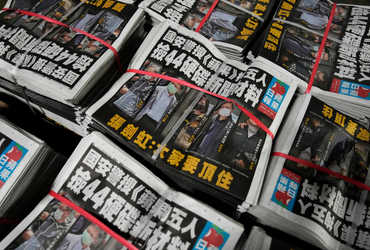 Hong Kong-based pro-democracy newspaper Apple Daily released one million copies of its final edition on Thursday. At the same time, Apple Daily newspaper will no longer be seen in the homes of Hong Kong residents. The print and online editions of the newspaper have been shut down following the arrests of five editors and officials. In addition, the newspaper’s assets worth $25 million have been frozen under a new comprehensive national security law. Earlier, a statement from the newspaper said that the online away print edition of the newspaper would be shut down due to the current situation in Hong Kong. Editors of pro-democracy newspapers are still in police custody.

The detainees have been accused of collusion with foreign powers to endanger national security, so the trial is likely to be lengthy. On the basis of 30 newspaper articles, questions have been raised on the security and complicity of the country. Apple Daily was a newspaper that looked alike to Chinese and Chinese puppets in the eyes of the Hong Kong government. According to China, the Hong Kong government has also warned the media to stay within the law. “Even if the end isn’t what we want, we have to survive,” wrote Apple Daily, referring to its readers. The resolve must remain. The newspaper thanked the readers for their support so far. The United States has strongly criticized the Chinese and Hong Kong governments for mishandling a newspaper. Apart from the US, the European Union and Britain have also condemned the incident. Everyone believes that the government is targeting pro-democracy people under pressure from China.