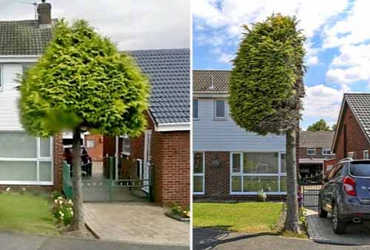 London, Ta. 25
A strange case has come to light in the city of Sheffield, UK. A British neighbor cut down a family tree of Indian origin. Because the birds sitting on the tree were polluting the neighbor’s courtyard. The half-cut tree became the center of attraction among the local people.
An elderly British couple lives in Sheffield, near Bharat Mistry, of Indian origin. There is a tree in the courtyard of Bharat Mistry. The leaves of that tree were falling in the neighbor’s courtyard. Not only this, the bird’s nest on the tree was making the neighbor’s courtyard dirty. The British neighbor was angry with the Indian-origin family over the issue. The British neighbor advised Bharat Mistry to set a trap in the tree next to him.
While the issue was being discussed, one day Bharat Mistry’s neighbor called a tractor and uprooted the tree towards him. Photos and videos of the event were shared on social media. This half-cut tree became the center of attraction among the local people.
On this issue, Bharat Mistry said that the birds were sitting in a 12-feet high tree and the neighbor claimed that it made the pods dirty. After being a neighbor for three years, he expected to be patient for a few days and then decided to set a trap in the tree. Or he can call a tractor to cut the branches of the tree on that side.
Bharat Mistry said that he is deeply saddened by this incident. Despite being acquainted for so many years, he cut down a tree on one side but did not ask even once. However, despite his move, the Indian family remained calm. He said that he had the right to change anything in the neighbourhood, but the whole family would be very sorry if the half-cut tree dried up.
The matter has become the center of discussion among the local residents. Local media also reported the incident.