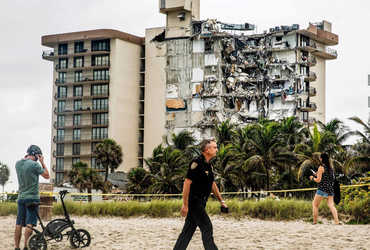 Surfside, Ta. 25
A 12-story building suddenly collapsed in a seaside town in Florida. Four were killed. Around 150 people are still trapped under the rubble.
A terrible tragedy has occurred in the city of Surfside in the US state of Florida. A 20-year-old 12-storey building suddenly collapsed. Many people were buried under the rubble when the building collapsed.
Miami’s mayor said rescuers had rescued 108 people, but preliminary investigations showed more than 150 people were still missing inside the building. That is, all these people are feared to be buried under the debris.
There were over 150 units in the building. All the information is being gathered. According to rescuers, the death toll is likely to be much higher. Minutes after the incident, people present said that there were terrible screams all around the building and people from inside pleaded for help.
The cause of the collapse is unknown. The Surfsite building is said to be 70 years old. A building called the Champlain Towers was built along the waterfront.
The governor of Florida began the process of providing financial assistance to the families of the victims. It also declared a state of emergency in view of the gravity of the situation.