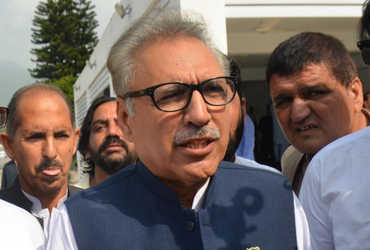 The President of Pakistan, Dr. Arif Alvi has made a serious allegation that the uranium used to make atomic bombs is being sold in the black market in India.

He appealed to the international community to pay attention to the sale of uranium on the black market in India. Such radioactive material may fall into the wrong hands, threatening the security of the people and the country as well. The international media has ignored it. which can have serious consequences.

Alvi made the remarks in a meeting with military officials from 12 countries, in which he talked about Pakistan’s victory in the war on terrorism. The Pakistani President claimed that the Pakistan Army had successfully launched an anti-terrorist operation against the terrorists. The war against Pakistan cost Pakistan ₹150 billion.

However, the President refrained from mentioning that terrorist organizations have flourished in Pakistan and said that Pakistan is making efforts to restore peace in Afghanistan as well. Pakistan has been affected by instability in Afghanistan.

Illegal uranium was seized in Mumbai last month and there was a stir in Pakistan. Pakistan’s Foreign Ministry said that there should be a proper investigation into the incident. Mumbai Police arrested two people with seven kilograms of uranium.