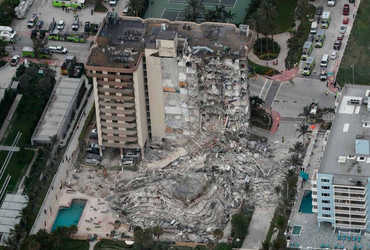 Surfside, Ta. 28
150 people are still missing after a 12-story building collapses in Surfsite City, Florida. So far nine people have died. The death toll was feared to increase further.
More than 150 people, including families of Indian origin, are yet to be traced. Vishal Patel and Bhavna Patel of Indian origin also lived in the building. The couple along with their one-year-old daughter Ishani are missing after the building collapsed.
Family members living in Britain said they were at home when the building collapsed. He received several messages and phone calls after the news of the building collapse, but did not get any response.
It is estimated that 150 people, including families, are still trapped under the rubble. Rescuers rescued around 100 people on the first day. But it was not possible to get the trapped people out immediately.
The mayor said the massive fire was caused by falling debris. The rescue operation is not going as fast as it should due to the fire. Florida Governor Ron DeSantis has declared a state of emergency.