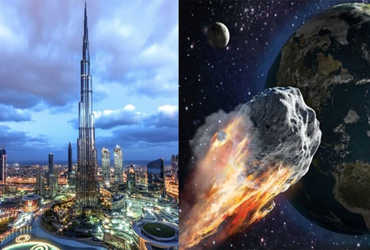 The US space agency NASA has warned that a 250-metre asteroid is moving towards Earth at a speed of 22,000 kilometers per hour.

On July 1, the asteroid will pass very close to Earth’s orbit. NASA has been monitoring this asteroid since 2006. In other words, it is about the size of the Burj Khalifa building.

NASA says it was first identified in 2006. One such asteroid passed near the Earth in May last year. Now the Burj Khalifa-sized asteroid is currently traveling at a speed of 6.29 km per second.

Scientists predict that on Thursday, July 1, the Earth will come closer. NASA has classified it as Dangerous. NASA is currently monitoring two thousand such asteroids. Which can be dangerous for the earth. 22 asteroids are likely to hit Earth in the next 100 years.

An asteroid is a type of rock that orbits the Sun like a planet. However, its size is much smaller than a planet. Most of the asteroids in Earth’s solar system are found in the orbits of Mars as well as Jupiter.

When the Solar System was formed about 4.5 billion years ago, the shapes of gas and dust that could have taken the form of planets turned into rocks, that is, asteroids. That is why they are not spherical in shape and no two asteroids are ever alike.