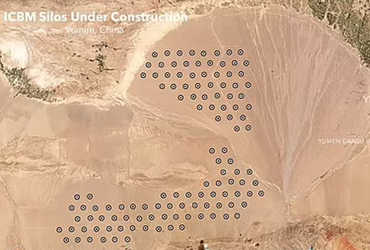 Experts claim that China is building more than 100 “missile silos” for intercontinental ballistic missiles in the desert northwest of the city of Yumen.

Researchers at the James Martin Center for Nonproliferation Studies in California have said China is building silos for missiles in the desert, based on commercial satellite images. About 114 construction sites have been identified in these drawings. Analysts say the features are reflective of the current launch facility for China’s arsenal of nuclear-armed ballistic missiles.

China is believed to have a smaller total amount of nuclear weapons than the United States and Russia, so the new arsenal indicates that China has significantly increased its arsenal. However, China has been notorious for producing counterfeit arsenals in the past. America had adopted a similar approach during the Cold War.

Researcher Jeffrey Lewis said the construction of the missile silos indicated that China intended to increase the credibility of its nuclear weapons. He says that if arsenals are being built all over China, then about 15 arsenals are under construction in this dictatorial country. Lewis, director of the East Asia Nonproliferation Program at the Center for Nonproliferation Studies, says China is believed to be expanding its nuclear arsenal to deter a US nuclear attack.