Will take out the eyes of those showing us: Jinping’s threat 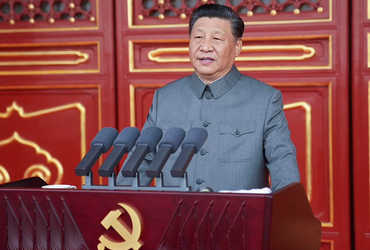 The ruling Communist Party of China (CPC) celebrated its centenary on Thursday at the historic Tiananmen Square. At the time, Chinese President and CPC chief Xi Jinping warned the world in a belligerent tone that “China will annihilate any country that oppresses, threatens or seeks to subjugate us.” Jinping stressed the need to increase military power to defend China’s borders. The ceremony saw Xi Jinping in the incarnation of the founder of the People’s Republic of China, Mao Zedong. “It is our historic mission to connect Taiwan with mainland China,” he said.

Wearing a Mao Tung-style jacket, Jinping said the time was running out to harass and intimidate China. Now if any foreign power tries to turn a blind eye to us, then it will have to face 1.5 billion people of China. Mao Zedong founded the Communist Party of China (CPC) in Tiananmen Square 100 years ago. Wearing a “Mao suit”, Xi Jinping on Thursday called for a stronger military force to protect the country and warned that the Chinese would never allow any foreign powers to intimidate or subjugate them.

Addressing the CPC’s centenary celebrations in historic Tiananmen Square, six-year-old Jinping called out the ruling party’s historic mission to connect Taiwan to mainland China in a speech that lasted more than an hour. Former US President Donald Trump and his successor Joe Biden have taken a tough stance on China and targeted China on issues such as trade, human rights and the origin of Corona. Without mentioning the United States and Taiwan, Xi Jinping said that no one should underestimate the great determination, determination and extraordinary ability of the Chinese people to defend their national sovereignty and territorial integrity. We must accelerate the modernization of national defense and armed forces.

Xi Jinping is considered the most powerful leader in the history of China after Mao Zedong, who will remain in power for the rest of his life. Jinping also spoke out against internal discontent in the party, saying any virus that could harm the health of the CPC would be eradicated. We have to strengthen the party leadership. The success of China depends on the party. History has shown that without the CPC, New China would not have been possible, and national uplift would not have been possible, and China would not have survived.

As the party celebrates its centenary, China faces pressure from the United States and the European Union, and emerges as a global leader, to isolate itself from the rest of the world at home and abroad in the wake of the coronavirus pandemic. facing western constraints. .

NHL down to four unvaccinated players

Cyberattacks concerning to most in US: Poll