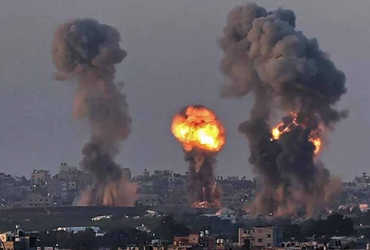 Jerusalem, t. 2
Hamas, a pro-Palestinian terrorist group, sent fireballs to Israel. After this Israel started a strike in retaliation.
Israeli forces carried out airstrikes on a Hamas site in the Gaza Strip. According to reports, Israel bombed the Hamas hideout throughout the night. The Israeli military said the airstrikes were part of a retaliatory strike after sending incendiary balloons.
No casualties were reported in the Gaza Strip. The Israeli military claimed that the target was Hamas, where the attack took place. Hamas also did not comment on the attack.
The Palestinians defended the release, saying the balloons were sent to pressure Israel to lift restrictions imposed on the coastal region. Hamas fired balloon bombs on the Israeli border.
This balloon caught fire in some places in Israel. The situation became tense again after Israel’s retaliation.
Tensions between the two have killed at least 50 Palestinians and 15 Israelis. The United Nations has made efforts for reconciliation between the two.