Moaning from the heat: In Canada where there was a village till yesterday, today the ashes are flying 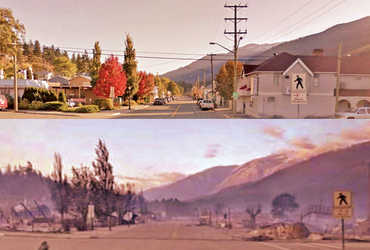 Wildfire flares up again due to extremely high temperatures

America and Canada have been facing severe heat for the last eight to ten days. In the village of Leighton in the Canadian province of British Columbia, the heat has engulfed the entire village. The village is surrounded by dry forests, which caught fire due to heat.

A government representative for the area, Bar-Vis, said 90 percent of the village had been burned. Cold regions like Canada and the United States are experiencing unimaginably high temperatures. The temperature is attributed to an environmental condition called the hit dome. Global warming is also responsible for this situation.

A hit dome condition is formed once in a thousand years. Authorities began evacuating about 1,000 people living in Leighton after the fire broke out on Wednesday. However, not everyone could get out until the fire broke out. So people had to run away with whatever they felt.

A couple aged about 60 years died. So far more than 500 people have died due to the continuing heat in America-Canada. This is the largest number of heat-related deaths in North American history. The temperature in Leighton was recorded at 49.6 degrees on Thursday. This was the highest temperature in Canadian history.

The first recorded temperature in Canada was 45 degrees in 1937. The fire was accompanied by wind speed of 70-72 kmph. Due to the fire reaching the highway, it is now difficult to reach Leighton village. The fire damaged the highway and hydro station in the area.

Due to the heat, air conditioner cooling centers have to be started in Canada and the United States. Vancouver, the largest city in British Columbia, currently has 25 cooling centers where people can go and enjoy the cool breeze. Many people said that there is no AC in our house because the area is already cold. It is becoming difficult now to live in such houses.

How and When To Watch the New Trailer

Bill Clinton improving, will stay in hospital amid infection