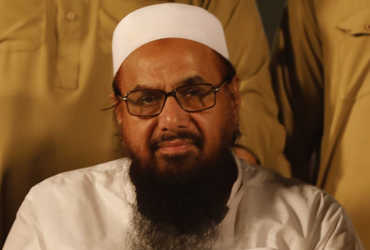 On June 23, three people were killed in a bomb blast outside Hafiz Saeed’s house.

Pakistan’s National Security Adviser Moeed Yusuf has alleged that an Indian national was behind the bombing outside the home of Hafiz Saeed, the mastermind of the 2008 Mumbai terror attacks in Lahore and the chief of the banned Jamaat-ud-Dawa last month.

On June 23, three people were killed in a bomb blast outside Hafiz Saeed’s house at the Revenue Board Housing Society in Jauhar Town, Lahore. While 24 people were seriously injured. No terrorist group has claimed responsibility for the attack.

During a press conference with Punjab Police Chief and Information Minister Fawad Chaudhry, Pakistan’s National Security Advisor claimed that the mastermind of the attack was an Indian national with links to an intelligence agency.

“Through forensic analysis and electronic equipment seized from these terrorists, we have identified the mastermind and mastermind of this terrorist attack,” Pakistan’s National Security Advisor Moeed Yusuf said. We have no doubt that the main mastermind is Indian intelligence agency Rono, who lives in India. However, he did not reveal the identity of anyone.

Moeed Yusuf said that the government has fake names, real identities and addresses of the suspects as it has come to light in collaboration with various agencies.